To put theory to practice, here's my straightforward and delicious recipe for dahl.  It features red lentils, a small quick-cooking legume that softens and forms a thick stew-like mixture when combined with vegetables and spices.  Red lentils are a rich source of protein, fibre, B vitamins such as folate and thiamin, and minerals such as iron, molybdenum, manganese, phosphorus, potassium and copper.  When combined with a grain such as quinoa or rice, this combination forms a complete protein source.


This recipe also features turmeric (Curcuma longa), a relative of ginger that is widely recognized for its anti-inflammatory properties. 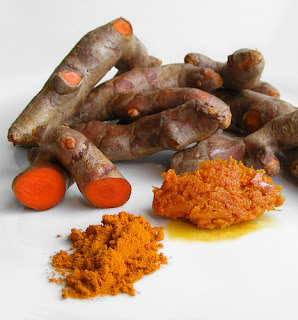 Turmeric in three forms: the whole root, ground, and powdered


Turmeric is associated with a myriad of health benefits, including protection against liver damage, anti-cancer effects, and reduction of inflammation in arthritis.  Dr Andrew Weil, MD, founder and director of the Arizona Center for Integrative Medicine, is a proponent of using turmeric abundantly in cooking.  He also points out the research showing that turmeric is much better absorbed when combined with black pepper.  For the recipe below, at least 1-2 tsp of turmeric and 1-2 tsp of freshly ground pepper is recommended.  The rest of the spices can be added to taste.  Enjoy!

Once the lentils have thickened up, add the veggies to the lentils and see how it tastes.  At this point, you can definitely add more spices – I also like to add a little more olive oil at the end for more flavour.
Serve dahl over a bed of quinoa (or rice!)